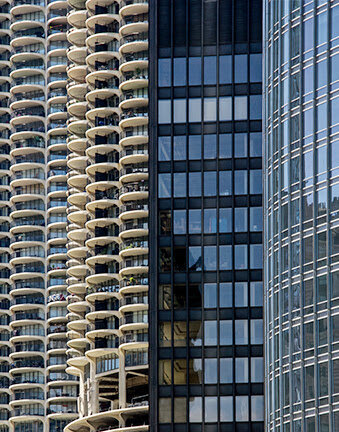 The images in Anthony Iacuzzi’s exhibition titled “Polytonal” are a combination of monochromatic and color images of buildings located in Chicago’s central business district. Some of the buildings captured by Iacuzzi with his digital SLR are iconic and easily recognizable, such as the main entrance to the Civic Opera House, or a south view of the Auditorium Building, while others are anonymous, generic and/or abstract. A few of the images vividly contrast architectural styles by superimposing one upon another in the frame. In the image titled “Mondo Condo,” taken in 2016, he focuses on the residential skyscrapers that have come to populate that part of the city. In this series, Iacuzzi endeavors to “showcase the inherent beauty of some of the structures that make Chicago world famous for its wealth of architectural styles and innovation.”

Anthony Iacuzzi is a graphic designer, art director and fine art photographer who has made Evanston, Illinois his home since 1980. His photographic work has received numerous awards and has been shown in galleries locally, nationally and internationally. In 2010 he co-founded Perspective Group and Photography Gallery where he continues to be an active member.

While somewhat house-bound and experimenting this past summer, Kurt Kramer decided to print a few photographs on watercolor paper. He loved the retro look and decided to use it as the basis for this collection titled “Retrographs.” For this exhibition, Kramer has drawn from images he has made over the past 22 years. He attributes his search for an old-fashioned sensibility partly to Perspective Gallery member Suzanne Metzel’s December 2019 exhibit of photogravure images.

Once captivated by the look and feel of antiquity, Kramer experimented with different papers and ultimately chose one made by Fabriano, an Italian manufacturer named after the village where paper has been produced since the 13th century. While these images have not been made with a centuries-old process, Kramer found the output on this paper to have the vintage look he sought.

In addition to the look, these images represent somewhat of a retrospective of Kramer’s images captured since 1998. His selections are among the more pictorial images from this period.  The small size of the images is significant as well because the tendency for 20-30 years has been to exhibit very large images. But, contrary to that practice, Kramer has chosen to show smaller images in order to “draw viewers in for a closer, more intimate experience.”